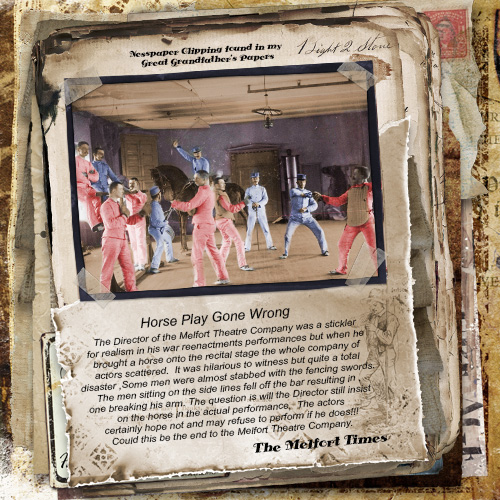 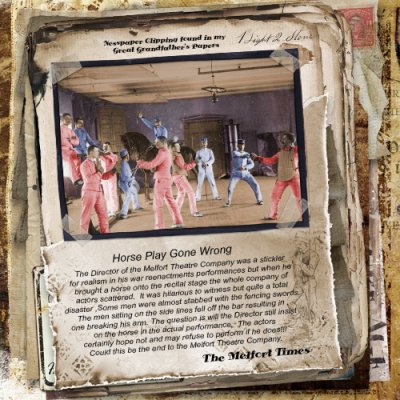 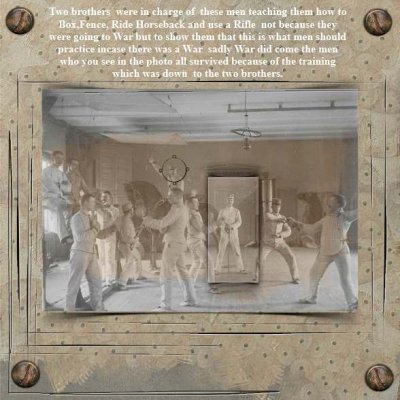 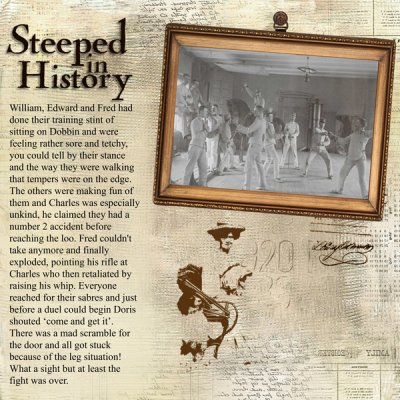 The Director of the Melfort Theatre Company was a stickler
for realism in his war reenactments performances but when he
brought a horse onto the recital stage the whole company of
actors scattered. It was hilarious to witness but quite a total
disaster ,Some men were almost stabbed with the fencing swords.
The men sitting on the side lines fell off the bar resulting in .
one breaking his arm. The question is will the Director still insist
on the horse in the actual performance, The actors
certainly hope not and may refuse to perform if he does!!!
Could this be the end to the Melfort Theatre Company.
Click to expand...
Reactions: Barb, Rosie, Poppy and 2 others
LOL, I love the story, and what a great job you did with the colouring of the photo. Hope that the Melfort Theatre Company keeps going, they sound like a fun group !
Janet, fabulous recolouring and great story!

Stunning page Janet, love the re-coloring and the amazing story, just awesome page!
Love the re-colouring and the story about the Melfort Theatre Company you spent a lot of time on this it get's a GSO from me.xxx
Fabulous story and gorgeous page xxxxx
Beautiful page and layering!
Fabulous! Love how you altered the colors
Janet, congrats on the GSO! Love the fabulous story and recoloring of the photo and the worn and tattered papers!
Fabulous re-colouring and a great story Janet. Congrats on GSO xx
Brilliant story and beautiful LO, love the torn papers. Congratulations for the GSO!
25th June, 2020.

what a hoot and I love the recoloring ... clever