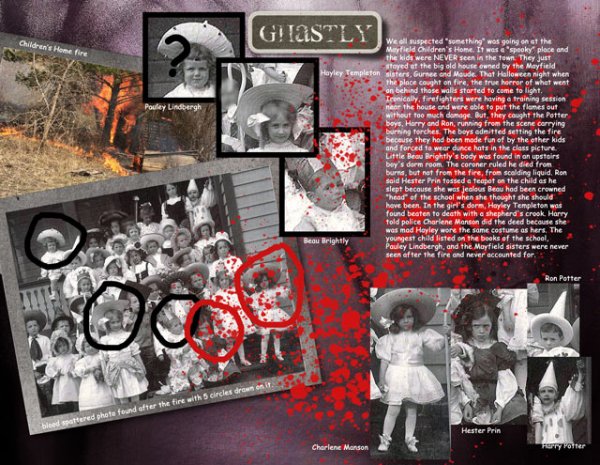 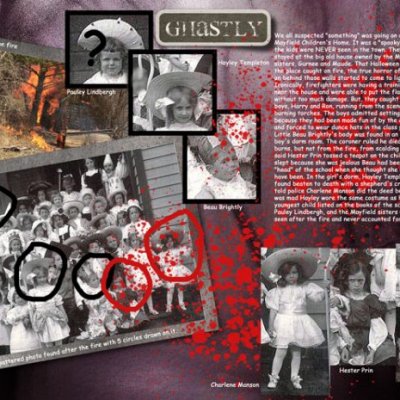 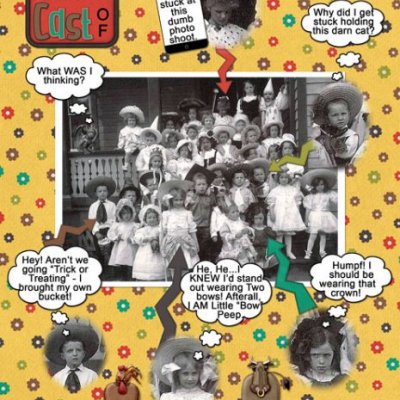 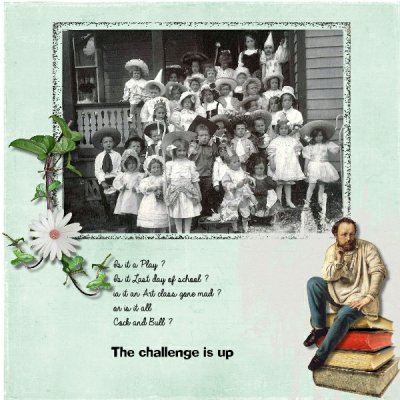 JOURNALING: We all suspected "something" was going on at the Mayfield Children's Home. It was a "spooky" place and the kids were NEVER seen in the town. They just stayed at the big old house owned by the Mayfield sisters, Gurnee and Maude. That Halloween night when the place caught on fire, the true horror of what went on behind those walls started to come to light. Ironically, firefighters were having a training session near the house and were able to put the flames out without too much damage. But, they caught the Potter boys, Harry and Ron, running from the scene carrying burning torches. The boys admitted setting the fire because they had been made fun of by the other kids and forced to wear dunce hats in the class picture. Little Beau Brightly's body was found in an upstairs boy's dorm room. The coroner ruled he died from burns, but not from the fire, from scalding liquid. Ron said Hester Prin tossed a teapot on the child as he slept because she was jealous Beau had been crowned "head" of the school when she thought she should have been. In the girl's dorm, Hayley Templeton was found beaten to death with a shepherd's crook. Harry told police Charlene Manson did the deed because she was mad Hayley wore the same costume as hers. The youngest child listed on the books of the school, Pauley Lindbergh, and the Mayfield sisters were never seen after the fire and never accounted for.
PHOTO CAPTIONS: Children's Home Fire; blood spattered photo found after the fire with 5 circles drown on it; KIDS' PHOTOS: Pauley Lindbergh; Hayley Templeton; Beau Brightly; Charlene Manson; Hester Prin; Ron Potter; Harry Potter

CREDITS: CHALLENGE PHOTO: from Graphics fairy; FIRE PHOTO: by zlobodeus at Pixabay; KITS: "Ghosttown" - Digilicious Designs; "Dark Night" - Booland Designs; FONT: Comic Sans
Click to expand...
Reactions: Poppy and A-M
A very well written story.
You are so creative with your "ghastly" story. Love the names you've given to the characters. The blood spatter is perfect!
Love your fun and fabulous story and page! Your stories are always fantastic!
Your story telling is always amazing another one which should be added to your books. ..This one was more scary I enjoy a bit of blood and this one is brilliant....well done on the effects and the names of the characters. xxx
Whoa! What a "ghastly" horror story! Great job!

Let spooky thoughts enter,and wander where they will ! Thanks so much for taking part.