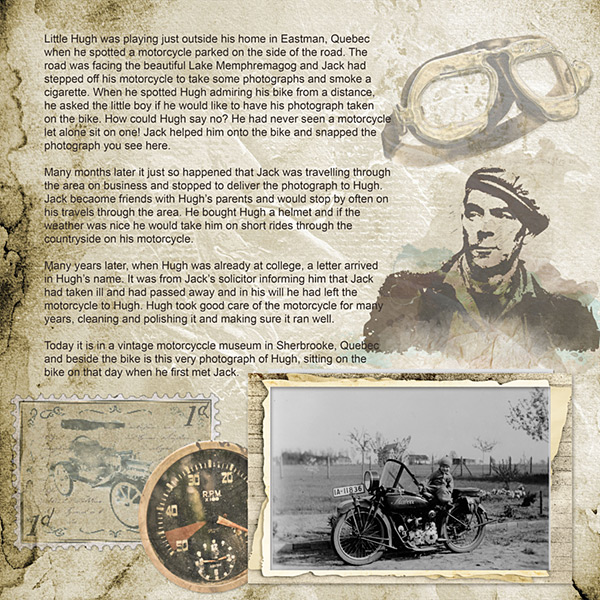 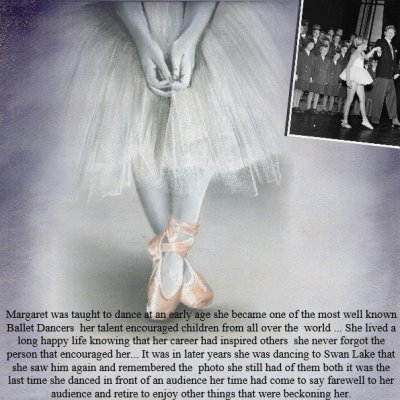 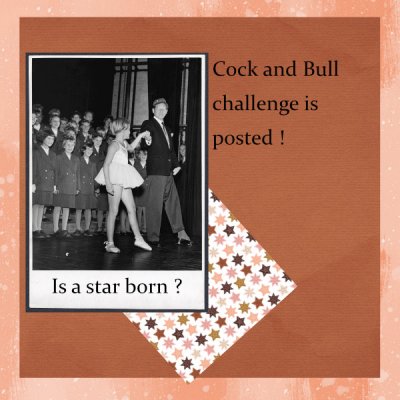 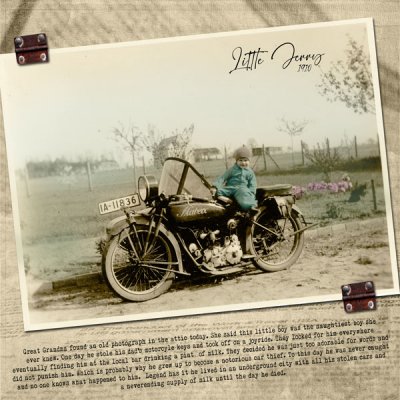 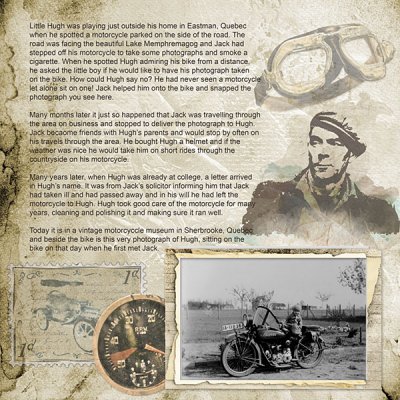 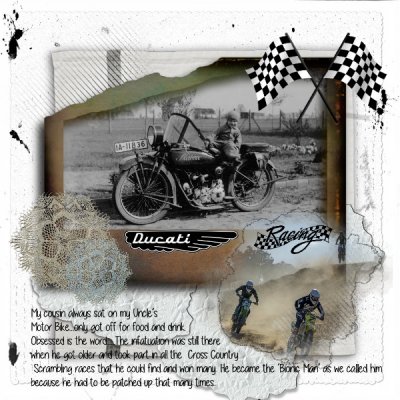 Cock and bull story:
Little Hugh was playing just outside his home in Eastman, Quebec when he spotted a motorcycle parked on the side of the road. The road was facing the beautiful Lake Memphremagog and Jack had stepped off his motorcycle to take some photographs and smoke a cigarette. When he spotted Hugh admiring his bike from a distance, he asked the little boy if he would like to have his photograph taken on the bike. How could Hugh say no? He had never seen a motorcycle, let alone sit on one! Jack helped him onto the bike and snapped the photograph you see here.
Many months later it just so happed that Jack was travelling through the area on business and stopped to deliver the photograph to Hugh. Jack became friends with Hugh's parents and would stop by often on his travels through the area. He bought Hugh a helmet and if the weather was nice he would take him on short rides through the countryside on his motorcycle.
Many years later, when Hugh was already in college, a letter arrived in Hugh's name. It was from Jack's solicitor informing him that Jack had fallen ill and died and in his will he left the motorcycle to Hugh. Hugh took care of the motorcycle for many years, cleaning and polishing it and making sure it ran well. Today it is in a vintage motorcycle museum in Sherbrooke, Quebec and beside the bike is this very photograph of Hugh, sitting on the bike on that day when he first met Jack.
Click to expand...
Reactions: Poppy, lovetodecorate, Barb and 3 others
22nd November, 2020.

DeLoris said:
Oh WOW! This is a beautiful story! I love the stamps you used as well. Congratulations on Gallery Eye Catcher! Now you have a GSO too! Congratulations!
Click to expand...

thank you so much!!!
Lidia, congrats on the GSO!
Love your story and illustration. I'm not sure this is a "cock & bull" story - it sounds too real!

You are welcome Sweetie! Enjoy!

What a great page and fabulous story. It's so believable it could very easily be true. Congratulations on the GSO and Gallery Eye Catcher. So well deserved.
Ahhh , such a nice story. I love your page , and I am realy happy you got both homepage eye catcher and the GSO. Perfect blending of the photos to the time period too ! Thanks so much for having fun on this challenge with me.
Wow, what an incredible story and love how your page, so deserving of GSO, Congrats