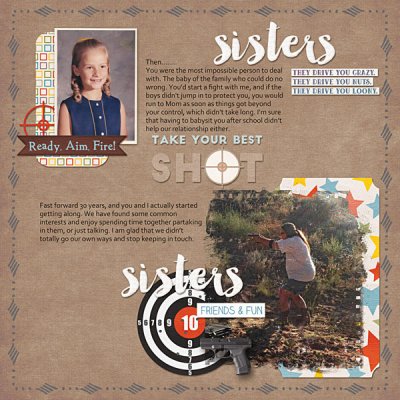 I don't know why, but the word up made me think of the Christmas song Up On The Rooftop.

This is my father, and one of my brothers re-roofing my house. And...on my days off I was up there with them. I grew up swinging a hammer as well. My father was a general contractor.

I bought this house in 1980. The original 3 rooms were built in 1905. There were additions that happened over the years between 1920s and 1940s. It was a fixer upper when I bought it, and that is exactly what I spent many years doing. And...had a lot of fun in the process. I still own this house, but now my son lives there with his son (my granddaughter is grown, and on her own).

Kit: Under Construction by Hot Flash Designs.
Photos by me, and family.
Font: Arial RoundedMT Regular
Click to expand...
Reactions: Poppy
I bet that took a long time to repair … I love the layout with the photos the vertical word strip with the song up on the rooftop the ladders and the clusters … this will remind you in years to come of those special moments.xxx
This is a wonderful family page to cherish. I love it that your son lives in it now and it continues in the family. The song is a cute touch! LOL

Interesting photos and wonderful journaling on your beautiful page!
I love that the word reminded you of that song!
We never know what we will find when re-doing an older home. It's good you had family to help!
Great memory page!